This unique formulation possesses pre-activated forms of B vitamins, where appropriate, in order to ensure immediate integration into the chemical processes of the body. Added choline and trimethylglycine allows the body to fully utilize the B vitamins in a way that will maximize their potential and thereby support optimal health.

B Vitamins are critical for your body to work correctly, but our modern diets aren't providing the levels we need. Thus the need for a good supplement.
When you take a B vitamin you would assume that your body was using all of it. Think again...

Most B vitamin supplements are as useless as the “g” in lasagna...or decaf coffee...who needs that? That’s why Activated-B has pre-activated forms to ensure maximum usage.

It also contains natural folates, not synthetic folic acid (which may be dangerous), making Activated-B a safe, and potent source of vitamin B.

What Are B Vitamins?

The various B vitamins work together like keys that unlock different enzyme reactions in the body that support a healthy metabolism. The Standard American Diet (SAD) has ridiculously low levels of B vitamins. Combine that with stress, medications and just general aging and that leads to far lower B vitamin levels. Without sufficient B vitamins the body’s chemical processes get slow and inefficient and that’s just not a great situation to be in when it comes to your overall health.

B vitamins are a family of water-soluble nutrients that were discovered together at the beginning of the 20th century, initially thought simply to be “vitamin B.” As nutrition advanced, however, it was learned that they are in fact a family of compounds, each with a distinct role to play in promoting health. B vitamins are now known to play critical roles in modulating biochemistry and metabolism, and represent the most common vitamins utilized by the body as co-factors for facilitating enzymatic function. The modern refined diet, high in sugar, alcohol, and devitalized foods, leads to lower levels of B vitamins. Numerous medications and chronic stress may lower B vitamin levels.

High-risk populations such as vegans or vegetarians, alcoholics, the elderly, patients with congestive heart failure, or those who have had bariatric surgeries are at risk for vitamin B deficiencies. While B vitamins have mainly been researched individually, they also have efficacious power when taken together. For example, B complex supplementation has been shown to decrease the levels of homocysteine, an inflammatory marker in cardiovascular, metabolic and neurological diseases, such as diabetic nephropathy and Alzheimer’s disease, slowing the rate of cognitive decline. B vitamins also exhibit analgesic effects via activating the nitric oxide GMPc pathway. 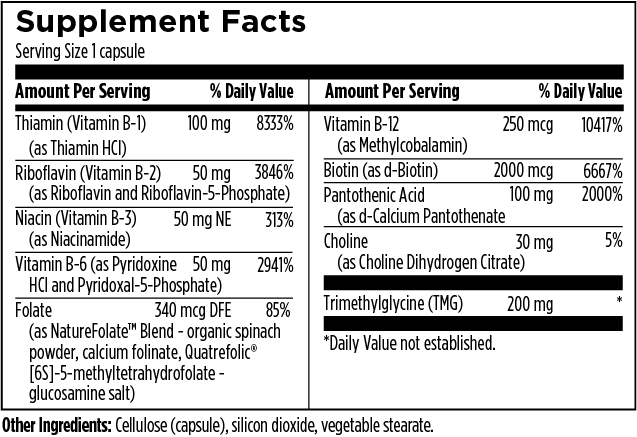 † These statements have not been evaluated by the Food and Drug Administration.
This product is not intended to diagnose, treat, cure or prevent any disease.

Vitamin B1 is needed for energy production, heart function, and the health of the brain and nervous system. Severe thiamin deficiency is often a result of heavy alcohol misuse which can lead to serious brain damage due to its major role in energy production. Animal studies showed that chronic alcohol application in conjunction with severe thiamin deficiency resulted in profound changes in neuroimmune genes, with a moderate to severe increase of pro-inflammatory cytokines within the thalamus, hippocampus and frontal cortex. B1 also helps remove lead from the body. Thiamin deficiencies are associated with energy, cardiovascular, and neurological disorders as vitamin B1 is an essential co-factor for several energy pathway enzymes to produce ATP.

Vitamin B2, also known as riboflavin, is another B vitamin that helps the body turn food into energy, and is considered a powerful antioxidant.(19) Patients with low thyroid function may have an increased need for vitamin B2, particularly in the activated form known as riboflavin-5-phosphate.(12) Taking riboflavin imparts a yellow color to the urine which is harmless.

Niacinamide is needed to metabolize food (carbohydrates, fats, and proteins) and is an essential factor in central nervous system health and function. Niacinamide is converted into the coenzymes nicotinamide adenine dinucleotide (NAD) and NADP, which function in oxidation-reduction reactions. The liver can convert niacin into niacinamide by adding an amine group. Biological responses to niacin, nicotinic acid and niacinamide are virtually equivalent when taken in common doses. When taken in supraphysiological doses they act differently (e.g., 500 mg niacin for stabilizing lipids).Clinical signs of early niacinamide deficiency include lack of appetite, muscular fatigue, indigestion, depression, insomnia, headaches, glossitis, and skin lesions. Severe deficiency may lead to pellagra, with dermatitis, dementia, diarrhea, and possibly death (the “4 Ds” of pellagra).

Niacinamide (also known as nicotinamide) has been shown in research to protect and even regenerate islet cells of the pancreas and may be helpful for blood sugar support. The mediation of redox reactions and sirtuin-protein regulation by NAD+ plays a major role in regulating metabolism and circadian rhythm, a key factor in brain health.

Concentrations of NAD+ decrease in the aging process and may be associated with age-related pathologies, such as neurodegenerative diseases, and increase in NAD concentrations via nicotinamide supplementation may be an effective anti-aging therapy and and prevent age-related associated disorders.

Vitamin B6: For Good Health

Vitamin B6 in Activated-B is presented as pyridoxine and the activated form known as pyridoxal-5-phosphate (P5P). Vitamin B6 plays an important role in vital life processes, which include amino acid metabolism, hemoglobin production, the efficient functioning of the nervous and immune systems, and the modulation of blood sugar. B6 supports overall female hormonal balance and is very useful in the management of PMS, as well as nausea and vomiting that may accompany pregnancy. Vitamin B6 is shown to downregulate oxidative stress mechanisms, playing a role in cognitive function; thus a low serum level of B6 is suggested to play a role in the pathophysiology of Alzheimer’s disease. The active form of vitamin B6, (P5P), plays a vital role in the synthesis of several stress and mood-lated neurotransmitters — GABA, serotonin, dopamine, epinephrine and norepinephrine — as a necessary cofactor for conversion. Vitamin B6 deficiency can reduce levels of these neurotransmitters, which may lead to increased anxiety, depression, and stress-related disorders. Deficiency is also linked to increased levels of homocysteine, and patients with deficiency exhibited a six-fold higher risk of cardiovascular disease than healthy patients.

Folates are essential cofactors in one carbon metabolism and their deficiency is associated with health risks such as neural tube defects, cancers and hyperhomocysteinemia. “Folic acid” and “folate” are often used interchangeably, but more appropriately, folic acid refers to the fully oxidized synthetic compound (pteroylmonoglutamic acid) used in dietary supplements and in food fortification, while folate refers to the various tetrahydrofolate derivatives naturally present in foods. It seems that since the mandatory folic acid fortification of cereal-grain products in the U.S. in 1998, many breakfast cereals are over-fortified with folic acid. Consumption of cereal along with other folic acid-containing beverages and dietary supplements could result in a chronically high intake of synthetic folic acid. The appearance of unmetabolized folic acid in the bloodstream following intake of as low as 400 micrograms per day of folic acid from fortified foods or supplements caused many scientists to be concerned with the potential health risk of unmetabolized folic acid since it is thought to aggravate pre-existing cancers. Research found that folic acid supplementation is associated with increased cancer risk, especially colorectal cancers, and may promote preexisting neoplasms. However, there is contradicting evidence reporting folic acid may be protective against BRCA-linked breast cancers.

Folate status plays a vital role in brain health and neurodevelopment from conception through adulthood as a necessary nutrient for proper DNA methylation and one-carbon metabolism. Accordingly, we’ve chosen not to add more synthetic folic acid into the diet, and instead has included NatureFolate™, a natural folate blend, in Activated-B. NatureFolate™ is made from a concentrated organic spinach powder containing a blend of natural folates, including 5-methyltetrahydrofolate (5-MTHF) and 5-formyltetrahydrofolate with additional fortified 5-formyltetrahydrofolate as calcium folinate.

In addition, Activated-B includes the patented folate derivative Quatrefolic®, an innovative form of folate that has demonstrated high bioavailability and solubility as well as long lasting stability.

Vitamin B12: A Must Supplement for Strict Vegetarians

Vegetarians are particularly susceptible to low vitamin B12 levels, as B12 is the only B vitamin found exclusively in animal products. In particular, pregnant vegans need to supplement months prior to pregnancy, because pregnancy increases B12 requirements. Mothers undersupplied with B12 may have babies with neurological problems. Also, older adults are often low in vitamin B12. If left untreated, B12 deficiency can manifest in serious hematological and neurological disorders. Methylcobalamin is the activated and more bioavailable form of B12 that better supports the methylation pathways and has been shown to slow cognitive decline and gray matter atrophy.

Pantothenic acid, previously known as vitamin B5, is a member of the B complex family that helps immune function, energy generation, and the body’s production of stress hormones.(44)