What do your boss, your kids and an 800 lb mamma grizzly bear have in common?…

They all stress you out!

The grizzly bear situation is easy enough to avoid; the others, not so much…

Stress causes your adrenal glands to kick into over-drive to help you get away from the bear. But when that “bear” (stress) never goes away, your adrenals keep producing stress hormones like cortisol. Eventually this may lead to poor adrenal response and results in fatigue, reduced initiative, low moods, sleep disturbances and difficulty handling even mild stress.

Stress Support is a comprehensive blend of nutrients and botanicals to support healthy adrenal function and help you deal with the bears in your life.

Stress Support by Re is part of the Re-Move product line and is specially formulated to help remove stress by supporting the body’s natural ability to manage it. This formulation is a comprehensive blend of nutrients and botanicals to support healthy adrenal function.†

The adrenal glands are responsible for regulating a wide variety of processes in the body, most notably the “fight or flight” response to stressful situations. These glands produce several hormones and neurotransmitters, some of which are designed to help regulate energy levels and mood on an ongoing basis, and others which are intended to be released only in short bursts, to help power someone through brief moments of intense stress or vigilance.

Due to the fast pace and unrelenting demands of modern life, however, the adrenal glands are taxed with producing higher amounts of these compounds more frequently. This may first result in overactive adrenal function, with very high levels of stress hormones (cortisol, in particular), but the glands can only keep up with this increased demand for so long before they begin to lag behind, eventually leading to poor adrenal response, in which output of these critical hormones and chemical messengers decreases, resulting in fatigue, reduced initiative, low moods, and difficulty handling even mild amounts of occasional stress. It is common for some people to “ping-pong” back and forth between these two states, leading to feeling simultaneously “tired and wired.”

B-vitamins and vitamin C are crucial contributors to energy generation at the cellular level, which may bolster adrenal function and combat the fatigue that is a hallmark of suboptimal adrenal function. The amino acid tyrosine is a building block for thyroid hormones as well as the neurotransmitters dopamine, epinephrine, and norepinephrine, which are involved in balanced moods and the ability to cope with stress.

A key feature of Stress Support is the inclusion of several herbal adaptogens—compounds that help the body regulate the production of various hormones and neurotransmitters. Whether the need is for an increase or a decrease, they facilitate the normalizing of these levels. Rhodiola, ashwagandha, American ginseng, and eleuthero are adaptogens that have been used for centuries in Chinese and Ayurvedic medicine to support healthy responses to stress. An additional ingredient, licorice, helps cortisol stay in the bloodstream longer, thereby lessening the demand on the adrenals to produce more of it.† 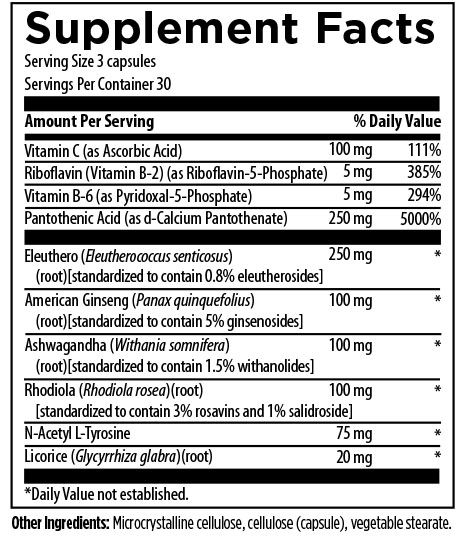 † These statements have not been evaluated by the Food and Drug Administration.
This product is not intended to diagnose, treat, cure or prevent any disease.